June 2015. The dam burst on the old hamstead

27. and 28. April 2015. & Co. sets up a tent camp at the perfect non-site in Hvittingfoss center beside the sun studio, the mainroad roundabout and opposite of the petrol station.

24. April 2015. & Co. in Skinmo doing shopping at BAS. & Co. gives BAS gold medal for being the best and a most legendary art supply shop

9. February 2015. & Co. at the car parking in between the sportfisher´s shop, the yellow shed with the digital temp meter at its roof and Jærnia

26. January 2015. & Co in front of Hvittingfoss Bingo Palace, painting from the area where the burnt down railwaystation used to stand

31. Oktober 2014. & Co. in Hvittinfoss center between the gym, the shed and where the burnt down railway station used to stand

& Co. was founded during a formal ceremony, a heavy thunderstorm and a cup of coffee at Hof Veikro, 26 June 2014. Hof is located about a mile north of Hvittingfoss where & Co., at that point, believed this place to be the mid-point between Skien and Drammen. In a later check, this proved to be wrong. The center is in Hvittingfoss center.

The reason for this geographical confusion was exhorted by the fact that one of the & Co. member lives in Skien and that the other in Drammen. They both love to depict everything in painting and wanted now very much to do this together. They therefore put up a work schedule to meet to paint outdoors in Hvittingfoss every Monday and Friday. This they have from then on slavishly followed.

The small community Hvittingfoss (pronounced without the H) is situated furthest south in the Norwegian county of Buskerud. In this far-off forested countryside and farmland, next to the precipice steep rock walls, along a river and sandwiched between the countys of Vestfold and Telemark, the last year & Co. has met to work. The painting journey has gone from the community center in heavy rain, Eastward to the planted spruce forest in ten minus degrees, via the water power station in South one greyish January day, to be topped in February at the slalom slopes North in Hvittingfoss, in sunbath-like weather and minus eight. Then, & Co. met Spring by tenting close to the roundabout, next to Best petrol station.

Hvittingfoss is like a cut out from a small town community description from anywhere in the world. It consists of a main street crowned by residential buildings, a grocery store, hardware store, a medical station and a petrol station. Most of the inhabitants leave the place during the week to work elsewhere. During this time the street is quiet but pleasant welcomening, with a bingo hall that offers coffee for 10 kronor with refill, all day. The place was truly function as a survival-kit for & Co. between their cold and wet paint acts through last winter. Here are a bunch of people who do not work elsewhere. Some play bingo while others mainly drink coffee, eat their lunch and meet for a chat. In this environment & Co. has been invited to the history, life and habits of Hvittingfoss. At least, if & Co. had been listening carefully instead of feverishly concentrating on drawing their coffee drinking storytellers, and the smokers outside at the bingo terrace.

A partially erased crosswalk still exists from the petrol station and across the main street to a forgotten place where a former sunstudio lies. The crosswalk doesn´t really go to anything. Not to a pavement or any path. Only this unplanned and accidental site. A fine ugly place in the best of worlds. Well, the petrol station actually empty the snow they shovel there during winter time. Last spring this caused a heap of rubble containing of internal ice and snow, like a thermos, until so long as the beginning of June. The pile was reshaped as a look-alike of Mount Fuji by & Co. They shoveled it into a form that resembled the volcano on the dot. One spring day & Co. shall return to this site again. Angles and details will be overlooked, and conquered anew. Fuji must be painted from at least 36 views.

Behind Fruktlagret (= the Fruit Store) & Co. has so far made their best paintings. People in Hvittingfoss name it Fruktlagret as everyday speech. The name seems to live on from a time it probably was used as a fruit store. Now it is a hardware store that sells lawnmowers and other stuff.

After being a while at the non-site in the area around the former sunstudio, & Co. now were unsure how to continue their journey through Hvittingfoss. They had remained there so long that it became more and more lucid what they actually were depicting. It was as the longer they dove into the details, the more details they discovered. The weeds began to grow high around them until they found themselves situated in a green, blue, beige, pink and spicy chaos. So, with uncertain steps and groggy legs, they therefore rapidly broke up and moved their canvases, easels, brushes, palettes and oil colors across the road, onward behind a residential building, between Best petrol station and Fruktlagret.

Suddenly a standstill lung opened up by Fruktlagret´s 40 meters long and ochre yellow back side wall. Here are some trees, a municipal light brown shed, the residential building, some scrap, an overgrown tractor and a Toyota mini-van without wheels.

At the sunstudio & Co. worked close to a roundabout where the county-road 40 meets the Highway 32. Beautiful but in an eternal roaring traffic. Now behind Fruktlagret the scenery got visible. One painter found back to his colors. The other began to thin and dim his colors. Volumes were pumped down and the outline of a new continent began to come to light. & Co. believe that they will come back here many times to come.

When fall eventually begins & Co. probably withdraws into itself for a while. & Co. dont know what this means? Maybe they bring their memories of Hvittingfoss in to each others studios, to examine what happens when depicting the world under a roof, behind walls and a coffee machine in an arm-length. Or maybe Hvittingfoss remain to be the scene where they let giant canvases take form, during eternal homecomings. Maybe they will continue as usual, as new.

& Co. dont know. They know for sure that Don Quixote and Sancho Panza rides again and that Hvittingfoss in some way will continue to see & Co. with their tools sharpened and with determined eyes fixed on worlds all corners in the small community.

January 2015. & Co. over a coffee and a waffle at the Bingo palace. Small talk with Geigrid and other lovely Hvittinfoss locals

Geirid, whose welcomening personality always make us feel at home

the bingo hall, with all nice people and coffee that has kept us warm during cold winter days

Nero´s pub, where they have been so friendly and let us sit and work for hours on their tables

the former sunstudio, the abandoned house, the noise preventing wall beside county-road 40, the light brown municipal building behind Fruktlagret. All you, for being so pleasent to let us paint you and also for being so well functioning painting-dryers.

Terje and his wife in their beautiful Chevy van for coffee, tissues, soft ice cream and inspiring meetings

the no longer existing train station from where many motifs of the main street are made to paintings, like for example the bingo hall, the no longer functioning fire station wich now functions as a Troll wood carving workshop, the gym, medical station and some residential buildings

a red shed, the damping, a planted spruce stand in south and the slalom slope in north. Thank you!

the non-site, between the former sun studio, the noise preventing wall and opposite of Best, where we have been tenting, painting, crying, felt cold, starving, painting, laught out loud and rough in despair and joy, painting even more and not least constructed the Mount Fuji, and then might as well paint this as well.

the wonderful and gentle staff at Best petrol station for all coffee, nice chat, and wc. This is the world center, and a warm house for tired tenting artists and an important traffic stop. Like a Canal Grande  without selfie sticks and japanese wedding couples. And an even bigger thank you for so generously let us use the petrol station for the & Co. exhibition Hvittingfoss & Co.

well, we might as well thank all Hvittingfoss for letting us use your village in the middle of the calm busy everyday life. The man and the woman in the street who leave us in peace and sometimes gently asks what we really do. 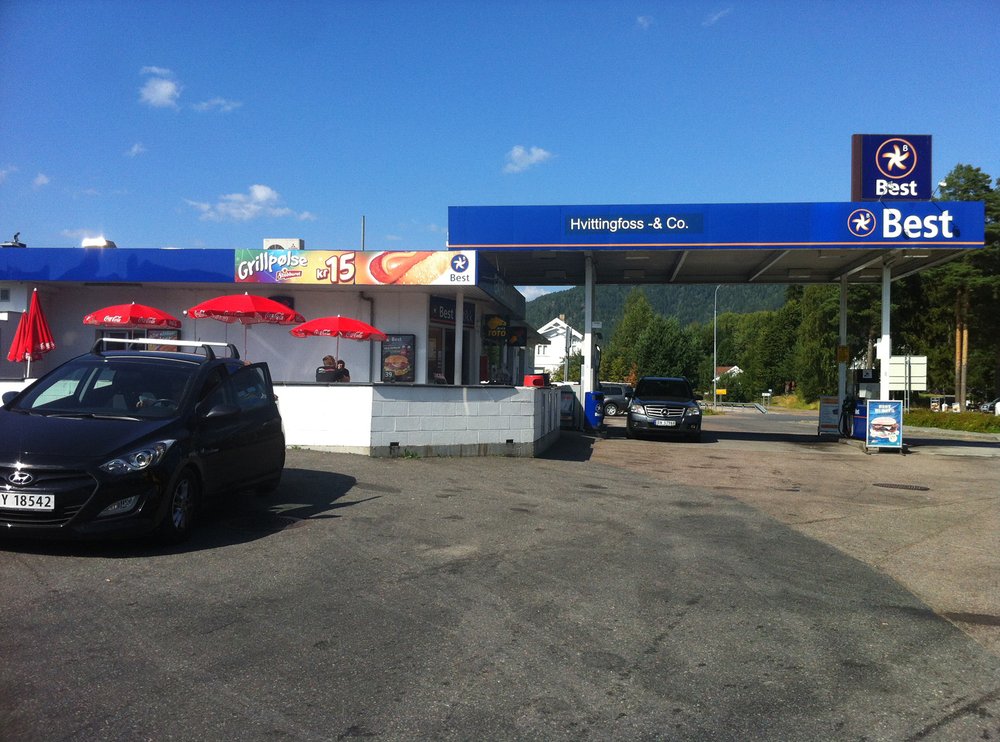 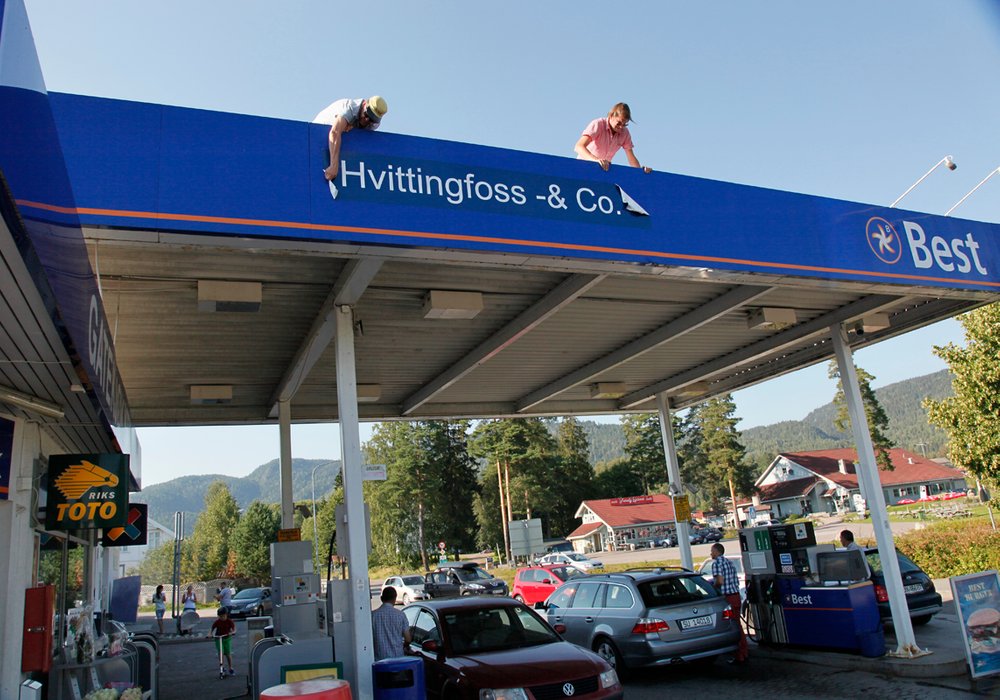